Found in all oceans of the world, orcas are most common in the Arctic and Antarctic and are often spotted off the west coast of the United States and Canada. Orcas are found in both coastal waters and open ocean. Orcas are highly social animals that travel in groups called pods. Pods usually consist of 5 - 30 whales, although some pods may combine to form a group of 100 or more. Orcas establish social hierarchies, and pods are lead by females. The animals are thought to have a complex form of communication with different dialects (slightly different language) from one pod to another. Orca gestation is 13 to 16 months. A calf is born in autumn weighing almost 400 pounds and measuring up to seven feet in length. A calf will remain with its mother for at least two years. 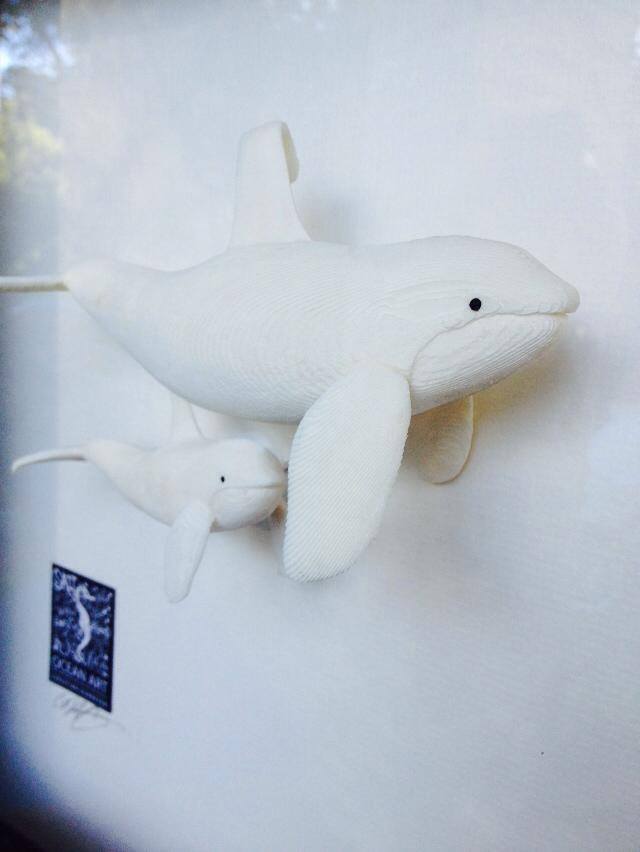 This commissioned piece was requested by a lady who was inspired by the release of orcas in captivity, she specifically requested that the dorsel fins be bent as they are in captivity, however, her reason for this, was to consciosly be reminded that one day they will all be freed, to which the dorsel fin in straight. The orca, or “killer whale” (Orcinus orca) is a toothed whale and is the largest member of the dolphin family. It is highly social and composed of matrilineal family groups. Orcas have long, rounded bodies with large dorsal fins at the middle of their backs. Their black bodies are marked with white patches on the underside and near the eyes.

Orcas feed on fish, squid, birds, and marine mammals. Like dolphins, orcas use echolocation – bouncing sound off of objects to determine their location – to hunt and use a series of high-pitched clicks to stun prey.

The orca’s large size and strength make it among the fastest marine mammals, able to reach speeds in excess of 35mph!

Members of orca pods very often work together to catch a meal. Pod members sometimes will force many fish into one area and then take turns feeding or will beach (slide out of the water onto the shore) themselves to scare seals or penguins into the water, where other killer whales are waiting to feed.

Official worldwide populations of orcas are currently unknown, but likely not to be less than 50,000 individuals.

Many orcas live with their mothers for their entire lives!
$1200 SOLD. Commissions available