Whilst it may look simple to carve cuttle bone into shapes
But I assure you, it’s harder than it looks and especially when you have lines to match

Until the beginning of the 19th century anchors were of imperfect manufacture, the means of effecting good and efficient welding being absent and the iron poor, whilst the arms, being straight, generally parted at the crown, when weighing from good holding-ground. A clerk in Plymouth Yard, named Pering, in the early part of that century (1813) introduced curved arms; and after 1852 the British admiralty anchor, under the direction of the Board, was supplied to H.M. ships, followed by Lieutenant (afterwards Captain) Rodger’s anchor. Rodger’s anchor marked a great departure from the form of previous anchors. The arms were formed in one piece, and were pivoted at the crown on a bolt passing through the forked shank. The points or pees to the palms were blunt. This anchor had an excellent reputation amongst nautical men of that period, and by the committee on anchors, appointed by the British admiralty in 1852, it was placed second only to the anchor of Trotman.

Later came the self-canting and close-stowing Martin anchor, which, passing through successive improvements, became the improved Martin anchor made of forged iron. A projection in the center of the arms works in a recess at the hub of the shank; the vacancies outside the shank are filled by blocks bolted through on each side, and are flush with the side plates, which keep the flukes in position.

The introduction of cast steel in 1894 led to the improved Martin-Adelphi pattern, in which the crown and arms are cast in one, and, with the stock, are made of cast steel, the shank remaining of forged iron. A projection in the crown works in a recess (right image), and is secured in its place by a forged steel pin, fitted with a nut and washer, which passes through the crown and the heel of the shank.

All of the above anchors were provide with a stock, the use of which is to “cant” the anchor. If it falls on the ground, resting on one arm and one stock, when a strain is brought on the cable, the stock cants the anchor, causing the arms to lie at a downward angle to the holding ground; and the pees enter and bury themselves below the surface of the soil.

Stockless anchors have been extensively used in the British mercantile marine and in some other navies. In 1903 they were adopted generally for the British Navy, after extensive anchor trials, begun in 1885. Their advantages are: handiness combined with a saving of time and labor; absence of davits, anchor-beds, and other gear, with a resulting reduction in weight; and a clear forecastyle for “right ahead” gun fire or for working ship. On the other hand a larger hawsepipe is required, and there appears to be a consensus that a stockless anchor, when “let go” does not hold so quickly as a stocked one, is more uncertain in its action over uneven ground, and is more liable to “come home” (drag).

At the beginning of the 20th century, the stockless anchors principally in use in the British navy are Hall’s improved, Byer’s, and Wasteneys Smith’s.

In Hall’s improved anchor, the arms and crown of cast steel are in one piece, and the shank of forged steel passes up through an aperture in the crown to which it is secured by two cross bolts. Two trunnions or lugs are forged to the lower end of the shank.

In W.L. Byer’s plan, the flukes and crown consist of a steel-casting secured to a forged shank by a through bolt of mild steel, the axis of which is parallel to the points of the flukes; one end of the bolt has a head, but the other is screwed and fitted with a phosphor bronze nut to allow the bolt to be withdrawn for examination. A palm is cast on each side of the crown to trip the flukes when the anchor is on the ground, and for bringing them snug against the ship’s side when weighing. 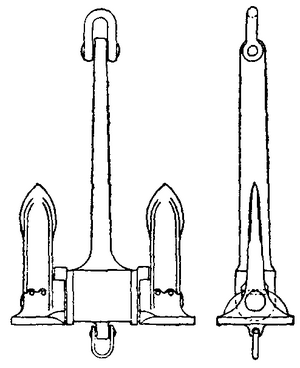 Wasteneys Smith’s anchor is composed of three main parts, the shank and crown which form one forging, and the two flukes or arms which are separate castings. A bolt passes through the crown of the anchor, connecting the flukes to it; to prevent the flukes working off the connecting through bolt, two smaller bolts pass though the flukes at right angles to the through bolt and are recessed half their diameter into it.